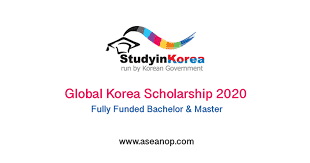 GKS stands for global Korea scholarship. This is a scholarship that is backed by the government of the republic of Korea and is implemented by the national institute for international education which is an organisation that is operated under the control of the ministry of education of Korea.

The global Korea scholarship started in 2010 when the government of Korea took all the scholarships supported by the government under one umbrella called GKS. The aim of the program is to facilitate a greater understanding between the republic of Korea and other nations through educational exchanges and human resource mobilisation which will contribute to international peace.

Specifically, the government seeks to reach out to developing countries with software-oriented development assistance in education

They include invitational programs such as ;

This is for students who are from Africa or Latin America who are invited to Korea for an in-depth academic training as well as a chance to have a first hand experience of Korean culture so as to raise future global leaders.

The Korean government scholarship program is for international students who want to pursue a Bachelor’s degree in Korea. The Scholarship is available for masters and PhD level too. This scholarship is fully funded and it provides non-Korean the opportunity to acquire a Bachelor’s , masters and PhD degree after one vigorous learning of the Korean language. It aims to develop global leaders and to raise Korea-friendly networks globally.

Benefits of the KGSP

The total number of beneficiaries worldwide is 1,276 from 153 countries . About 170 applicants get the awards annually.

The summer program is a 5 week event that invites 80 participants, all undergraduate students ( 40 from Africa and 40 from latin America.)

The students are nominated by their university and the recommendations is sent to NIIED who are responsible for the final selection of the participants. NIIED is an executive agency within the ministry of education.

The selection will be based on

– NIIED will be responsible for the round trip from the home country to Korea.

The Korea global scholarship is a group of funding opportunities that are offered by the government of the republic of Korea. There are very generous grants and fully funded scholarships that are met useful ti international students seeking to pursue a degree in Korea.

Germany Free College – How to Apply

3 Oldest University in The World, the big names