Home How to study in Canada without IELTS – Best ways

How to study in Canada without IELTS – Best ways 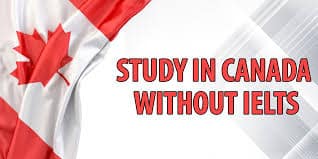 It is a common practice for candidates aspiring to study in Canada to have IELTS. Is it completely difficult to study in Canada without IELTS? (Is one of the questions that will be answered in this article). Canada has become a major destination for international students and some are denied the opportunity of obtaining an education there because of IELTS requirements.

IELTS is an abbreviation for International English Language Testing System. It is an international standardized test of candidate’s proficiency in English language. IELTS is jointly managed by the British Council, IDP: IELTS Australia and Cambridge Assessment English. It was established in 1989.

Candidates aspiring to study abroad especially in Canada ordinarily should have the IELTS (International English Language Testing System. Nowadays, IELTS test is no longer compulsory in many Canadian universities. Apart from the IELTS being expensive, the candidates need to put in strenuous efforts to clear it.

If you want to study without having IELTS score, you can do this strategically by choosing to study in universities in Canada that do not consider IELTS as a compulsory criterion. you can learn more here

How To Study In Canada Without IELTS 2019

– Many universities in Canada can accept other forms of English proficiency credentials apart from IELTS.

Alternative English Proficiency proof for studying in Canada aside IELTS

In many Canadian universities, you can be admitted if:

Top Universities In Canada That Do Not Require IELTS

Some of the rules governing the non-requirement of IELTS scores to study in Canada are that the candidate is either native English speaker; or students coming from non English countries who have received formal degree education of three or more consecutive years in English.

In addition, students who have completed either O-level or A-level examination also earn an IELTS exemption.

Each of the universities has it own set of exemptions criteria and requirements to prove applicant’s English language proficiency.

Some of the above universities will allow conditional admission (like the candidate might have to do extra language courses while in the studying). there is  ore information about studying in Canada without writing an English proficiency exam.

Canada introduced new student visa regulations that does not only allow international students to study in the country’s universities, but also gives them certain levels of freedom to work. For example, while earlier prospective students only needed to show an intent to study in Canada now they need to prove their enrollment in a college that accepts international students.

Therefore aspiring candidates applying for visa without providing IELTS scores need to ensure their enrollment in the university of their choice that does not require the IELTS papers.

In the past, no aspiring candidate will study in Canada without having IELTS. Nowadays, the story has changed. You can be admitted in some Canadian universities  provided you have other criteria they may require.

Best Colleges In Canada For International Students To Study